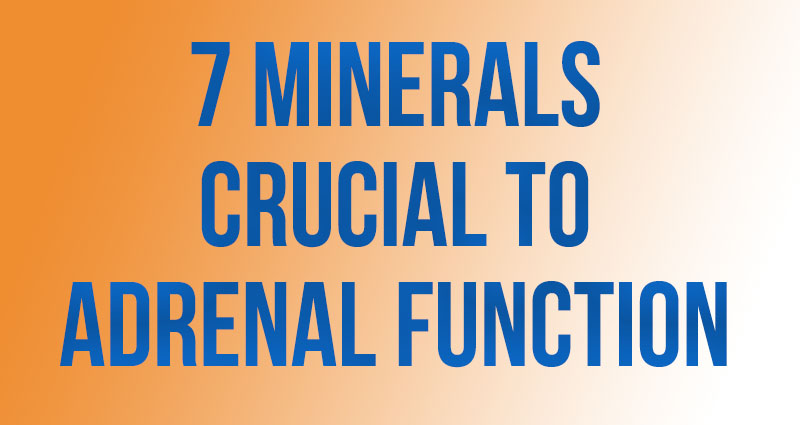 Last week we covered the importance of B vitamins to adrenal function. Now let’s focus on minerals, which are also a key factor in maintaining wellness. Here are 7 minerals you need to know about if you’re experiencing chronic stress or adrenal fatigue.

Magnesium is vital to the energy creation process, and also acts like a spark plug for your adrenal glands. However, those with adrenal fatigue are typically deficient in magnesium. In fact, the adrenal glands are so dependent on the presence of magnesium that it is crucial for recovery from adrenal fatigue.

Approximately 400 mg. of magnesium citrate is the recommended daily dosage for the average person and it is best absorbed when taken at night. Magnesium works in concert with vitamin C and pantothenic acid to potentiate the function of the adrenal glands.

The following trace minerals (zinc, selenium, copper, manganese, potassium, and chromium) occur only in very small amounts in your body, but are very important for your overall health. While suffering from adrenal fatigue you may become edgy or anxious. Trace minerals can have a calming effect on the body and help you feel more tranquil.

Trace minerals required by a typical adult in quantities of less than 1mg per day.

One of zinc’s best-known functions is as an antioxidant, protecting cells, including immune cells, from damage by free radicals. Free radicals are unstable molecules responsible for tissue damage and signs of aging. They are generated from exposure to pollutants, toxins, and even by the body’s normal metabolism and production of hormones such as cortisol and progesterone.

Selenium is vital to several aspects of human metabolism, especially those involving immunity. Deficiency in this trace mineral can also be a contributing factor for adrenal fatigue.

The copper-dependent enzyme, cytochrome c oxidase, plays a critical role in cellular energy production. This is done by catalyzing the reduction of molecular oxygen (O2) to water (H2O).

Manganese is used by the body in key biochemical reactions, such as the manufacture of insulin (with the help of cortisol, released from the adrenal glands) and some functions of the hypothalamus. It’s also a critical component in the structure of tendons, ligaments, and joint tissue.

This trace mineral is critical to the body’s function of blood sugar management. Chromium, along with the adrenal hormone cortisol, is necessary for the production of insulin.