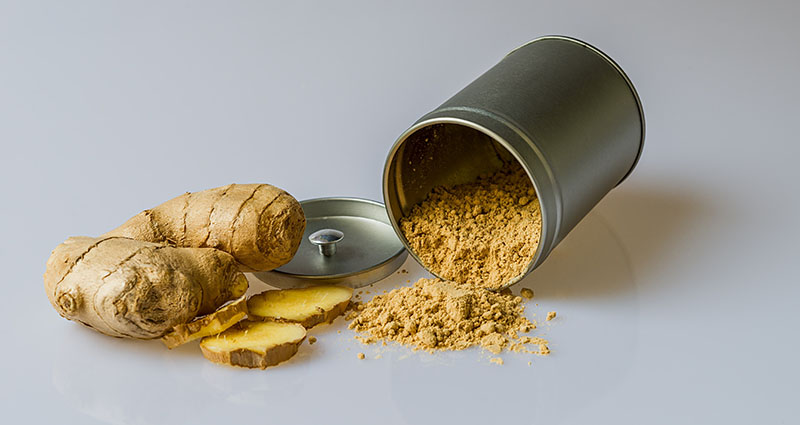 Ginger, perhaps the most beneficial of all spices, has been used by Indian and Chinese people for more than 5,000 years to treat many ailments. Now available all over the world, ginger is widely cultivated and used as a spice and for its medicinal properties. In this blog we’re examining the many benefits of this amazing spice.

One of the more common health benefits of ginger is its anti-nausea properties. This seems especially true with pregnancy-related nausea, like morning sickness. According to a review of 12 different studies that included 1,278 pregnant women, 1-1.5 grams of ginger can significantly reduce the symptoms of nausea. Ginger may also relieve nausea and vomiting in people undergoing certain types of surgery. There are also a couple of studies showing that ginger can help with the nausea associated with chemotherapy, though more research is needed.1

According to studies done in both humans and animals, ginger may play a beneficial role in weight loss. A literature review performed in 2019 concluded that ginger supplementation reduced body weight significantly, and also improved waist-hip ratio and hip ratio in overweight or obese people. One 2016 study of 80 women with obesity found that ginger could help reduce BMI and blood insulin levels, which are associated with obesity.1

Osteoarthritis is a condition where the joints of the body degenerate, leading to symptoms such as joint pain and stiffness. A review of literature found that people using ginger to help with their osteoarthritis saw significant reductions in pain and disability. Another study from 2011 found a combination of topical ginger, mastic, cinnamon, and sesame oil can help reduce pain and stiffness in people with osteoarthritis of the knee.1

As mentioned in the weight loss section, ginger has been shown to help reduce blood insulin levels. In a 2015 study of 41 participants with type 2 diabetes, 2 grams of ginger powder per day lowered fasting blood sugar by 12%. It also greatly improved hemoglobin A1C (HbA1c), which is a marker for long-term blood sugar levels. HbA1c was reduced by 10% over a period of 12 weeks. There was also a 28% reduction in the Apolipoprotein B/Apolipoprotein A-I ratio and a 23% reduction in malondialdehyde (MDA), which is a byproduct of oxidative stress. A high ApoB/ApoA-I ratio and high MDA levels are both major risk factors of heart disease.1

Dysmenorrhea is a term used to define the pain felt during the menstrual cycle. Ginger has long been used a pain reliever, including menstrual pain. In a study from 2009, 150 women were told to take either ginger or a nonsteroidal anti-inflammatory drug (NSAID) for the first 3 days of their menstrual period. Ginger was able to reduce pain as effectively as the 2 NSAIDs offered.1

It’s well known that high levels of LDL (bad) cholesterol are linked to an increased risk of heart disease. Your diet plays a large role in your levels of LDL. A study done in 2018 on 60 people with hyperlipidemia (high levels of cholesterol) had participants take 5 grams of ginger powder each day. Those involved saw their LDL levels drop by 17.4% over a 3-month period.1

Chronic inflammation and oxidative stress can speed up the body’s aging process. These 2 factors are also believed to be among the key drivers behind Alzheimer’s disease and age-related cognitive decline. There are animal studies that suggest the antioxidants and bioactive compounds in ginger can inhibit inflammatory responses that occur in the brain. Beyond that, there is evidence that ginger can help to directly enhance brain function. In a 2012 study of healthy middle-aged women, daily doses of ginger extract were shown to improve reaction time and working memory.1

Lastly, ginger has also been shown to help lower the risk of infection. Ginger can actually inhibit the growth of many types of harmful bacteria. A 2008 study showed ginger is quite effective against the oral bacteria linked to gingivitis and periodontitis, both inflammatory gum diseases. Fresh ginger may also be effective against the respiratory syncytial virus (RSV), a common cause of respiratory infections.1