Herbs for Stress and Adrenal Fatigue

Certain herbs that promote healthy adrenal function can be very beneficial during adrenal fatigue. The best herbs for supporting and reinvigorating the adrenals are adaptogenic ones that have a normalizing effect on the adrenal glands. They revitalize fatigued adrenals without over-stimulating them and help the body cope more effectively with stress. Four of the most useful herbs for adrenal fatigue and stress are described briefly below. Following that are a few words about herbs to be avoided during adrenal fatigue because they can delay or prevent adrenal recovery. 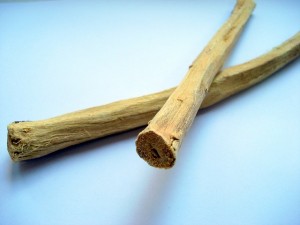 The herb best known for supporting adrenal function is licorice. Yes, the ingredient that gives that common black twist of candy its flavor is beneficial for adrenal glands (check ingredients as not all “licorice” candy contains licorice). This anti-stress herb is known to increase energy, endurance and vitality and act as a mild tonic. It has been used to ease drug withdrawal and stimulate the adrenal hormones for anti-inflammatory action. It is known to naturally fortify cortisol levels, arguably the most important hormone in stress and adrenal fatigue. Licorice has also been used to help decrease symptoms of hypoglycemia, a common side effect of decreased adrenal function. Wound healing, which can be slowed down by stress, has been improved by using licorice. Licorice can also soothe nervous stomachs, a common occurrence in people under stress. Both blood circulation in the heart and arteries and production of interferon- like substances by the immune system are stimulated by licorice.

There has been some concern that licorice increases blood pressure. This is because licorice may increase sodium retention and also partially block the conversion of cortisol into cortisone, which can produce higher amounts of circulating cortisol. Cortisol slightly increases contraction of the medium arteries and heart muscle causing blood pressure to rise. However, there is so little actual licorice in candy that consuming normal amounts is unlikely to produce any elevation in blood pressure. In any case, people experiencing adrenal fatigue typically have low blood pressure, so this is not usually a concern. The few who have both high blood pressure and low adrenal function can limit licorice intake and/or monitor their blood pressure to make sure it stays below approximately 140/90. 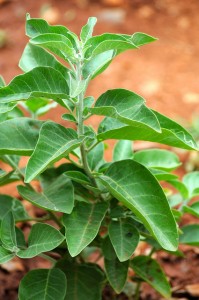 Ashwagandha is an ancient East Indian herb with a history of therapeutic use dating back to at least 1,000 BC, probably because of its direct beneficial effects on adrenal tissue and function. Although it is also known as Indian ginseng, it is not related to ginseng. Traditionally, ashwagandha has been prescribed as a tonic for all kinds of weaknesses, as well as to promote strength and vigor. It has long been regarded as a rejuvenator and mild aphrodisiac. Because of its anti-inflammatory action, Ayurvedic physicians use it as the treatment of choice in rheumatic pains, inflammation of joints and other related conditions that are commonly seen in states of adrenal fatigue.

Ashwagandha is considered to be an adaptogen. An adaptogen is any substance that helps the body function more towards its normal level. Studies have shown ashwagandha is capable of normalizing cortisol levels, whether they are too high or too low. This herb is becoming recognized for its multiple health benefits and especially for its value in adrenal fatigue. However, in very high doses (above 35gms/day) ashwagandha can actually inhibit adrenal function. 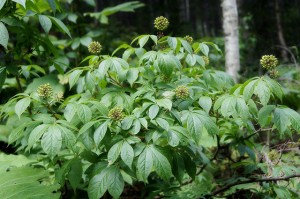 Siberian ginseng, although not from Siberia and not strictly a ginseng, is good for women as well as men. It has a wide range of activities that help support and rejuvenate adrenal function, increase resistance to stress, normalize metabolism, and regulate neurotransmitters (which are important in modifying the stress response). It counteracts mental fatigue and is known to increase and sustain energy levels, physical stamina and endurance. With its antidepressant properties, Siberian ginseng has demonstrated its ability to calm anxiousness, improve sleeping, diminish lethargy, lessen irritability and induce a feeling of well-being. It has been used by Russian workers, deep-sea divers and Olympic athletes for better performance and by cosmonauts for stress and disease resistance, increased vitality and to counter depletion of the adrenal stress hormones.

In addition, it has been shown to normalize blood sugar, stimulate antibodies to bacteria and viruses, increase resistance to environmental pollutants, improve absorption of some B vitamins and decrease vitamin C loss. Although it has been shown to normalize blood pressure, it should not be used if blood pressure is very high. Siberian ginseng is more normalizing than stimulatory in its effects on the adrenals and, as can be seen by its actions, it can be an important aid for anyone trying to recover from adrenal fatigue. (See below for a cautionary note about Korean Ginseng Root [Panax Ginseng])

Maca has been recognized for centuries in Peru for its many health benefits, including its ability to increase stamina, energy and endurance, and improve the ability to withstand stress. This adaptogenic herb helps normalize the body’s response to stress, modulate cortisol levels, reduce the exhaustion that follows a stressful event, and protect the body against the negative effects of stress.

Ginger Root (Zingiber officinale) and Ginkgo Leaf (Ginkgo biloba) are two other herbs worth mentioning for their beneficial effects during stressful times. Ginger is another adaptogen for the adrenals that helps modulate cortisol levels. Gingko is a powerful anti-oxidant that helps protect the adrenal glands, the brain and the liver from inflammation and free radical damage that occurs during stress.

How to Take Herbal Preparations

The above herbs can be obtained and taken singly or ideally together, in liquid or dry forms. Always take the usual precaution of starting with low doses, and increasing the dosage slowly when using herbal preparations. Because of the varying strength of herbal preparations, it is best to follow the instructions on all packaged herbs. If there are no instructions, a general rule for preparation of herbs is as follows:

Tincture (alcohol extracts): Take 10-15 drops in liquid three to four times per day. Tinctures are important sources of the beneficial ingredients in plants because some of the most active agents in herbs can only be extracted using alcohol. Water extractions or glycerin-based preparations may not have the potency of alcohol extracts. However, since a number of people with low adrenal function are sensitive to alcohol, they can briefly simmer an herbal tincture in some tea or water (place drops in 8 oz. of water, set on lowest heat for 10-15 minutes) to evaporate the alcohol before taking it.

Other Fluid Extracts: Take 5-10 drops in liquid three to four times per day.

Leaves: Steep (cover with boiling water and let sit off the heat) 1 teaspoon of dry leaves per cup of water for 15 minutes. Strain and drink. Honey or other natural sweeteners can be added to taste.

Root: Simmer (heat in water kept below boiling) 1 teaspoon of grated dry or fresh root for each cup of water for 15 minutes. Strain and drink. Honey or other natural sweeteners can be added to taste.

Caution! Just as there are herbs that are beneficial and restorative to the adrenals, there are herbs you should avoid if you are experiencing adrenal fatigue because they can worsen your symptoms, increase your recovery time, or prevent your recovery by further exhausting your adrenals. These herbs include the following:

Also avoid any herbs or teas containing stimulants, sedatives, or hallucinogenic substances, and any teas that over-stimulate the nervous system or the adrenals. Just because it is natural does not mean it is good for you. Strychnine, arsenic, aflatoxin and mercury are also all “natural” substances, but would not be desirable in the body. So avoid these herbs.

Panax ginseng is an herb more suitable for men than for women. Although it has been shown to help increase cortisol levels, clinical experience has shown that while men can usually take Panax ginseng with mild to significant benefits, women should be careful in its use. This type of ginseng, especially Korean Red, can have adverse effects in some women, similar to the adverse effects they experience with excess DHEA. These can include an increase in facial hair and acne. In men increased aggressiveness, irritability, or sexual excesses are signs that they are taking too much and should cut down or stop taking it. Men are advised to use it in small doses at first and build up gradually and women to avoid its use altogether.