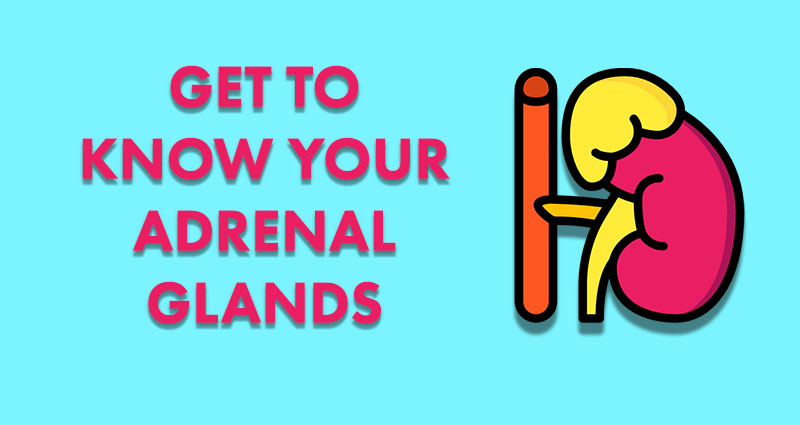 Get to Know Your Adrenal Glands

Location of the Adrenal Glands

The adrenal medulla is located in the middle of the gland inside the cortex. This is where stress hormones such as adrenaline and cortisol are produced. Both the cortex and medulla are covered in a protective layer called the adipose capsule.2

Both adrenal glands are only a very short distance from the aorta, the major artery of the body, and the vena cava, the major vein. This strategic placement allows for a very rapid adrenal response to hormonal messages transported via the blood. For example, Adrenal Corticotrophic Hormone (ACTH) is a hormone messenger from the pituitary gland that tells the adrenal glands how much cortisol to secrete. Within a few seconds of receiving this message the correct level of cortisol is on its way from the adrenals to the rest of the body.3

Function of the Adrenal Glands

As we mentioned in part 2 of this series, the adrenal glands are controlled by the pituitary. Like the other glands in the HPA axis, the adrenal glands are responsible for a number of hormones that are vital to different functions and processes in the body. For example, aldostreone helps control blood pressure by managing the levels of certain electrolytes in the body. Cortisol, along with adrenaline and noradrenaline, help the body respond to stress. Cortisol also helps regulate metabolism, blood sugar levels, and blood pressure, among other things. We look at the hormones of the adrenal glands in further detail in the next section.4

Hormones of the Adrenal Glands

Let’s start with the hormones produced by the adrenal medulla. Believe it or not, you don’t need the adrenal medulla to survive. However, that doesn’t mean the medulla is totally useless. The hormones produced by this region are released after the sympathetic nervous system is stimulated, which happens when you experience stress. Therefore, the medulla is part of the fight or flight response responsible to reacting to physical and emotional stress. The medulla produces two main hormones: epinephrine and norepinephrine.1

Since cortisol is so vital to the stress response, let’s talk a bit more on the role the adrenal glands play in the production of this hormone. Specifically, cortisol is produced by the zona fasciculata. In addition to the roles outlined above, cortisol also helps control the body’s use of fats proteins and carbs, and also controls the sleep/wake cycle. Here’s a step-by-step outline of how cortisol is produced and released.2

Tips to Support the Adrenal Glands