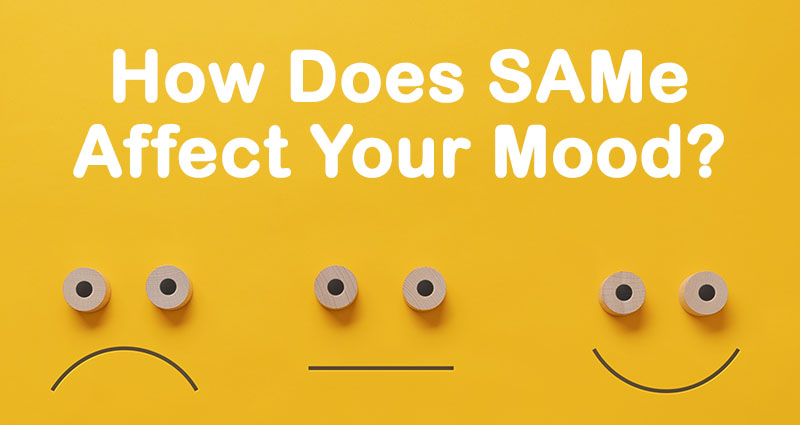 How Does SAMe Affect Your Mood?

S-Adenosyl-L-methionine, much better known as SAMe, is a chemical naturally found in the body. First discovered in the early 1950s, SAMe is made from methionine, an amino acid found in foods. SAMe is vital to many diverse functions in the body, from liver function to hormone regulation to mood regulation.1 In this blog we focus on how this wondrous chemical affects the mind and our mood.

There’s a bit of mystery as to how exactly SAMe works in the body, but it’s believed it helps boost the level of the neurotransmitters serotonin, dopamine and norepinephrine.2 These neurotransmitters are known as “feel good” chemicals that help balance mood and keep depression at bay.

Dopamine is released when your brain is expecting a reward. For example: say one of your favorite foods is freshly baked bread. When you smell bread baking, or see it come out of the oven (even if on TV), your brain may increase dopamine. When you eat fresh baked bread, the wave of dopamine released acts to reinforce the craving and focus on satisfying it in the future.

Say that you’ve been craving fresh baked bread all day but the bakery is sold out by the time you get there. The disappointment might decrease the amount of dopamine and lower your mood, but it may also intensify your desire for fresh baked bread. Dopamine is also involved in these functions, and more: blood flow, digestion, memory and focus, pain processing, and pancreatic function.4

Norepinephrine, also known as noradrenaline, acts very similarly to adrenaline, its counterpart. This hormone helps increase blood sugar levels, increase heart rate, and the relaxation of smooth muscle in the airways to improve breathing. Low levels of norepinephrine can lead to anxiety, depression and sleep disorders.5

SAMe needs vitamin B12 and folate to make these neurotransmitters as well. Research has found that many people experiencing depression are deficient in B vitamins, thus many practitioners will recommend taking B12 and folate along with SAMe, if recommended. 2