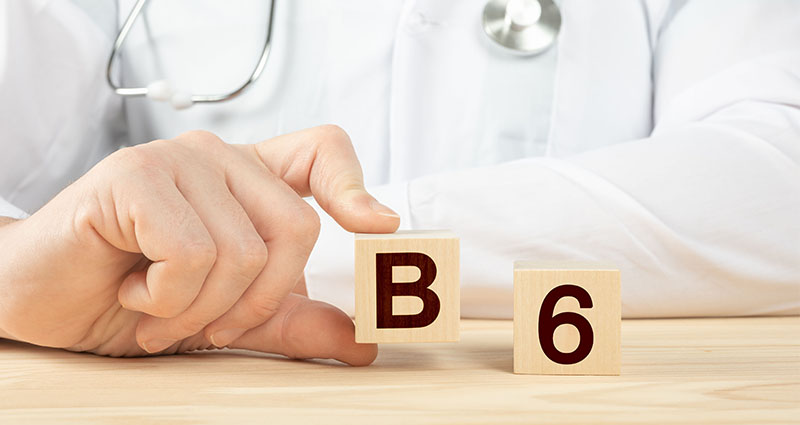 The Many Benefits of Vitamin B6

What is Vitamin B6?

As its name shows, B6 is part of the B complex of vitamins. Overall, the B vitamins help with metabolism, creating blood cells, keeping cells healthy, and energy production. Also known as pyridoxine, vitamin B6 is a water-soluble vitamin that the body does not naturally produce, so we must get this nutrient from food and supplementation.1

Benefits of Vitamin B6

Vitamin B6 is a busy nutrient, playing a role in more than 100 enzyme reactions. One of the main jobs of B6 is assisting the body in metabolizing proteins, fats, and carbohydrates for energy. Aside from that, B6 is also involved in immune system function, fetal and infant brain development, creation of neurotransmitters, and creating hemoglobin (the part of red blood cells that carries oxygen).1

Let’s look at some of the benefits and functions of vitamin B6 in more detail.

B6 is involved in regulating mood. This is partly due to the nutrient’s role in creating neurotransmitters that regulate emotion, like serotonin, dopamine, and GABA. This vitamin may also help decrease high levels of the amino acid homocysteine, which is linked to depression. Several studies have shown that symptoms of depression are associated with low blood levels and intakes of B6, especially in older adults.2

Vitamin B6 has been used to treat symptoms of PMS, including anxiety, depression, and irritability. It’s believed that B6 can help with PMS-driven emotional symptoms due to its role in creating neurotransmitters that regulate mood. A three-month study done on more than 60 premenopausal women found that taking 50 mg of B6 daily improved PMS-related symptoms of depression, irritability, and tiredness by 69%.2

For some time now, this nutrient has been used to treat nausea and vomiting during pregnancy. We’re not entirely sure how B6 helps with morning sickness, though it may be because of B6’s other roles during pregnancy. A study of 342 women in their first 17 weeks of pregnancy found that daily supplementation of 30 mg of B6 greatly reduced nausea after 5 days of treatment, compared to a placebo.2

B6 may help prevent certain eye diseases, especially a type of vision loss called age-related macular degeneration (AMD) that affects older adults. Studies have shown a connection between high blood levels of homocysteine and an increased risk of AMD. Since B6 helps reduce high levels of homocysteine, getting adequate levels of B6 may lower your risk.  Research has also connected low blood levels of B6 to eye conditions that block veins connected to the retina.2

Tags: b complex, B6, benefits of b6, nausea, nutrients, pyridoxine, vitamin b6