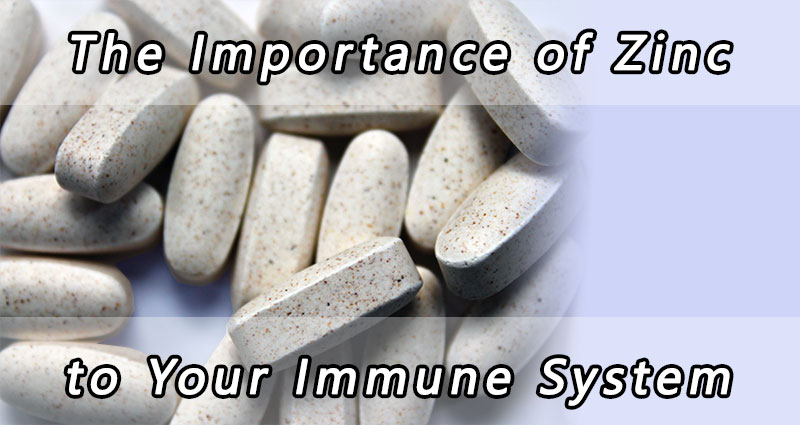 The Importance of Zinc to Your Immune System

Zinc, one of our favorite underrated minerals, plays a crucial role in immune health. This mighty mineral heavily affects numerous facets of the immune system, so much so that those deficient in zinc are increasingly susceptible to a variety of pathogens. (1)

Zinc is imperative for the development and function of cells mediating immunity, meaning you wouldn’t have much of an immune system at all without this mineral. Studies have shown than even a mild zinc deficiency can diminish multiple mediators of host immunity, such as the physical barrier of the skin, to cellular and humoral immunity. (1)

So, how do you know if have a zinc deficiency? Signs of marginal zinc deficiency include depressed immunity, onset night blindness, memory impairment, and diminished senses of taste and smell. (1)

In chronic zinc deficiency, your body actually reprograms the immune system, starting with the activation on the HPA stress axis and production of glucocorticoids that speed up the death of pre-B and pre-T cells (responsible for adaptive immune function). This can result in reduced lymphopoiesis (generation of white blood cells) and eventual atrophy of the thymus gland. (2)

Dietary zinc deficiency is a worldwide problem, and in addition to poor immune function, it is also associated with skin disease as well as increased susceptibility to infection. (3)

Zinc deficiency affects about 2 billion people worldwide, including an estimated 40% of the elderly in the United States. (3) For those who are not practicing a healthy diet to strengthen their immune function, immunity starts to diminish between ages 60 to 65. However, even those who are eating a proper diet may need zinc supplementation. (4)

A double-blind placebo-controlled trial of daily zinc supplementation showed that zinc can reduce the amount of acute lower respiratory infections by as much as 45%. Other studies have posited that zinc may lower clinical disease caused by plasmodium falciparum, which could reduce malaria-related clinic visits by over 35%. (1)

Zinc even has uses in our everyday lives as well. When zinc lozenges were administered to preschool children, they were shown to decrease the duration of the common cold as much as 30%. Zinc’s effect may be due to the result of increased zinc concentrations in the nasal mucosa, which may modify the anatomy of the binding site between the virus and ICAM-1, a protein that’s part of the immune system. (1)

As we get older, our immune system is more likely to become weak, which can lead to severe or even fatal health problems such as pneumonia and influenza, in addition to increased risk for developing autoimmune diseases and cancers. (4)

A 2007 study showed adults ages 55-87 had less plasma zinc and higher oxidative stress and inflammatory markers compared to those of younger adults. Half the older individuals involved in the study took zinc supplements for 12 months while the other half took a placebo. The results showed lowered respiratory infections and markers of inflammation and oxidative stress in the zinc group compared to the placebo group. (4)

How much zinc should you take? For most adults the recommended daily allowance for zinc ranges from 8 to 11 milligrams. Most of the zinc in the American diet is absorbed through the consumption of red meat and poultry, according to the National Institute of Health. (5) Additional food sources include nuts, beans, whole grains, some shellfish, and fortified cereals and dairy products.

Zinc is also available in supplement form and can be found in Dr. Wilson’s Adrenal C ®, Hair, Skin & Nails Plus Formula®, and BFF®.