The Regulation of Cortisol, the Stress Hormone 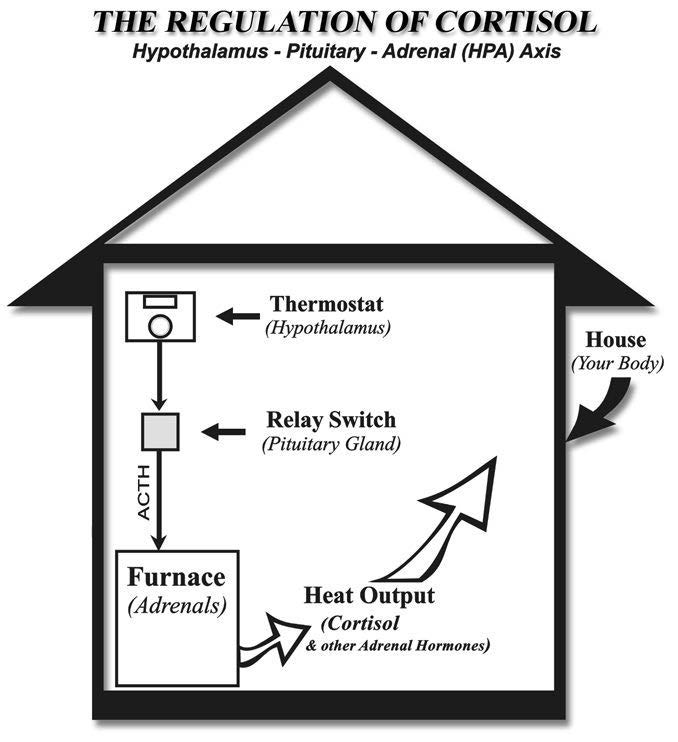 A negative feedback system works like the thermostat in a house or apartment. The thermostat senses the heat in the room and compares it with the desired temperature at which it has been set. When the heat gets too low, the thermostat signals the relay switch to tell the furnace to ignite, sending out hot air into the room and raising the heat. When the heat has risen to the desired level, the thermostat signals the furnace to quit until more heat is needed. This cycle is called a negative feedback system because when enough heat is released, a negative signal is sent to slow or stop the input.

In your body, your hypothalamus is analogous to the thermostat, your pituitary to the relay switch, your adrenals to the furnace, and your body to the room (see the illustration “The Regulation of Cortisol”). The amount of cortisol released is comparable to the heat released from the furnace. To a large extent you control the thermostat through the demands you place on your body. These demands arise from the physical situations your body has to deal with (diet, exercise, work, climate, etc.) and your reactions (emotional and physiological) to them. This negative feedback system is described below in the language of physiology.

The Physiology of Cortisol Regulation

The HPA Axis is one of the most important elements of the whole body process known as homeostasis, the process that maintains a steady internal biochemical and physiological balance in your body. The HPA Axis adjusts cortisol levels according to the needs of the body, under normal and stressed conditions, via a hormone called the Adrenal Corticotrophic Hormone (ACTH). ACTH is secreted from the pituitary gland in response to orders from the hypothalamus and travels in the bloodstream to the adrenal cortex. There it activates cells in all three (or four) zones to produce their various hormones.

Each zone generates different hormones as end products, but the process of making all hormones in all zones begins with ACTH binding to the walls of the adrenal cells. This initiates a chain reaction of intracellular enzymes that release cholesterol within the cell. The cholesterol is then used inside the adrenal cells to manufacture pregnenolone, the first hormone in the adrenal cascade. No matter which adrenal hormone is being produced, pregnenolone is the first hormone formed in the series.

In the zona fasciculata, pregnenolone is processed to form cortisone and then cortisol. Cortisol, once manufactured, is released into circulation. It takes less than a minute after the initial stimulation by ACTH for newly synthesized cortisol to be circulating through your blood to every part of your body, including to your hypothalamus where the concentration of cortisol is being constantly measured. Your hypothalamus, in its regulatory function, analyzes and integrates input from many different external and internal sources.

This input includes information from brain centers about overall excitability, energy requirements of your body, and sensory data from your brain centers for hearing, seeing, smelling, touch and taste. Based on this information, your hypothalamus determines how much cortisol your body requires and subsequently releases its own hormones as messengers.

The primary hormone messenger from the hypothalamus is corticotrophin releasing factor (CRF) which signals the pituitary gland to secrete a specific amount of ACTH. Thus ACTH is sent from the pituitary to your adrenal glands to begin the process described above all over again. Alterations in ACTH levels, and hence cortisol levels, are made minute by minute using this negative feedback loop, modulated by other information received by the hypothalamus as shown in the illustration.