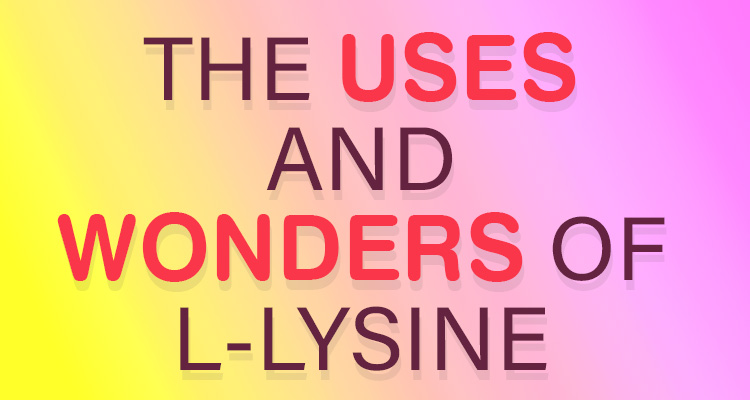 The Uses and Wonders of L-Lysine

Whether you’re suffering from high blood pressure, stress-induced anxiety, or skin outbreaks, L-Lysine may just be exactly what you’re looking for. L-Lysine is an essential amino acid which cannot be synthesized by mammals, thus making it indispensable. Today we’ll look at some of its many uses, as well as where L-Lysine can be found.

Over the years, L-Lysine has been the subject of many studies regarding skin outbreaks, and time and time again results have shown that it not only helps with the growth of outbreaks, but number of occurrences as well. Not only have these studies shown significant improvement regarding outbreaks, but there were also no adverse effects reported. The effect of outbreak prevention is based on the viral need for amino acid arginine, and the way lysine competes with arginine for absorption and entry into cells. Some researchers believe this ability to stave off outbreaks also helps in the prevention of many other diseases related to cranial nerves such as migraines, Meniere’s disease, and Bell’s palsy.

In addition to limiting the number of skin outbreaks, L-Lysine has also shown to prevent high blood pressure as well. According to a study done by Linus Pauling for the management of heart diseases, the extra amount of lysine in the blood helped create a “Teflon-like” coating around the lipoprotein particles, which prevents the lipoproteinfrom binding to the arterial walls. The lysine prevents plaque build-up, which prevents pressure build up in the arteries and hence reduce hypertension.

Lysine has also shown to reduce stress-induced anxiety in both human and animal studies. A 3-month randomized double-blind study involving members of poor Syrian communities showed that the plasma cortisol response to the blood drawing as a cause of stress was reduced in females, as was sympathetic arousal in males as measured by skin conductance when Lysine fortified wheat was introduced as a staple food.

Dietary inadequacy of essential amino acids, such as lysine, leads to nonspecific signs of protein deficiency, such as lowered resistance to disease, decreased blood proteins, and stunting in children. This study was based on a hypothesis that fortification of a lysine inadequate diet in poor communities may reduce anxiety and improve stress response, which may potentially improve the quality of life. The hypothesis originated from studies that found worsening of stress-induced anxiety and colonic health in rats fed a lysine-deficient diet and an improvement of stress responses in rats and pigs receiving lysine loads.

The good news is there are plenty of Lysine rich foods out there, so it’s easy to increase your intake no matter what your diet. Vegetables such as avocados, leeks, beets, and potatoes all contain lysine, and if you’re looking for fruit, pears, dried apricots, and dried peaches won’t steer you wrong. Soy based products such as Tempeh, tofu, soybeans, and soy milk all contain lysine, but if you’re looking for meat, try beef, pork, or chicken. And if you’re more in the mood for seafood you can’t go wrong with oysters, shrimp, and snails.

You can also get your lysine in with a snack if you’re on the go. Pumpkin seeds, cashews, macadamia nuts, and pistachios are all rich in lysine, and while grains usually aren’t, quinoa, amaranth, seitan, and buckwheat are some exceptions. If you’re after dairy-based lysine products, try cheese, butter, yogurt, or milk.

There are also supplements that contain L-Lysine if you want to regulate your daily intake. Dr. Wilson’s BFF contains L-Lysine and other ingredients that offer support for maintaining outbreak-free intervals.

There are plenty of healthy options to help add L-Lysine to your daily routine. If you’re dealing with stress, high blood pressure, or skin outbreaks, it’s never been easier to implement. Give L-Lysine a try today and help improve your quality of life!

Categorised in: Effects of Stress